Daughter of the Forest. 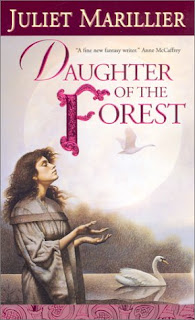 Last weekend I finally finished reading Daughter of the Forest by Juliet Marillier. Due to an unfortunate busy schedule it ended up taking over a month for me to finish, which was a bit frustrating because it turned out to be an incredibly good read.

Juliet Marillier writes historical fantasy. Her novels are set during historical time periods, but she bases her novels on myths. Daughter of the Forest is set on both sides of the Irish Sea, with Sorcha being the heroine of the story (no wonder I just had to read this one, right?). Sorcha is set a seemingly impossible task by the Fair Folk (faeries) to save her six brothers from a curse that has been placed upon them by an evil enchantress.

At first I found the story a little slow; there was a lot of explanatory text and dialogue, yet I couldnt make sense of where the story was heading. However, around 200 pages in (keeping in mind this novel is over 500 pages in length) it all started to fall into place and I gradually became more and more engrossed in the story.

I became attached to the characters, so much so that whenever something bad happened I wasnt sure if I would be able to continue reading for fear of another bad thing happening. I didnt want bad things to keep happening, I wanted Sorcha to save her brothers in a timely, ordely, pain-free manner; nothing horrible was allowed to happen to anyone or anything! Of course, it probably wouldnt have been nearly as enticing and exciting without it, though. In fact, a week after having finished reading it, I still find myself gazing off into space, thinking about Sorcha, her plight, her brothers, her story...

Daughter of the Forest is the first novel of four in the Sevenwaters Series. The other three novels are Son of the Shadows, Child of the Prophecy, and Heir to Sevenwaters. These and other books by Juliet Marillier are available at Amazon for all international readers, or if you're in Australia/New Zealand/Asia I recommend checking them out at Fishpond.

I have registered my copy at BookCrossing, but am yet to decide what I should do with it next: Keep in my Permanent Collection and loan out? Start a Bookring or Bookray? RABCK? However, if this is a novel you think you might be interested in reading, let me know and we might be able to arrange something.

1. How the Irish Saved Civilization by Thomas Cahill
2. Daughter of the Forest by Juliet Marillier
3. Wuthering Heights by Emily Bronte
4. The Boleyn Inheritance by Philippa Gregory

By the way, I am currently hosting a giveaway at my livejournal for a brand-new copy of Jane Austen's novel Pride & Prejudice. If you'd like to go into the draw to win it, all you need to do is go here and leave a comment, even if it is just to say you want the book. Unfortunately, today is the last day to enter the draw and I will be announcing the winner over the weekend, so if you are interested, you may want to hurry on over there right away!