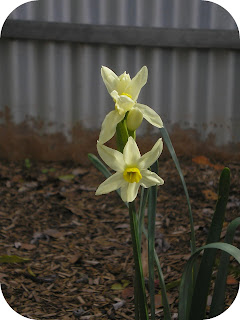 A colourful discovery in the garden:
A jonquil... 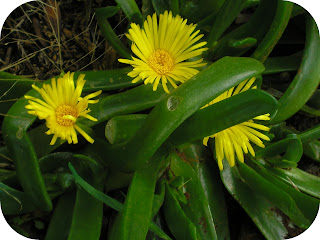 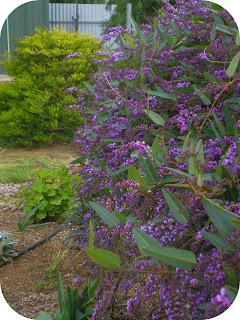 And a native creeper (whose name I've no idea),
all in bloom.
The first sign of spring, perhaps?
I'm amazed they've survived the frost, to be honest.
"Awake, thou wintry earth -
Fling off thy sadness!
Fair vernal flowers, laugh forth
Your ancient gladness!"
~Thomas Blackburn

Winter Wednesday is a photo feature hosted by Hazel Dene.
Posted by xo.sorcha.ox at 1:40 PM 7 comments: 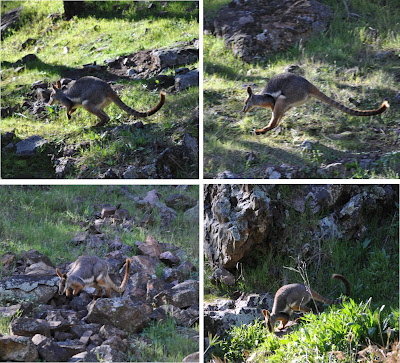 On the weekend, SJ & I attended a social gathering with my work colleagues at Warren's Gorge in the Flinders Ranges, a short drive from where we live. It was a great day filled with perfect weather, food, drink, bushwalks and laughter.
Oh, and rock-wallaby sightings.
I have always kept a lookout but until Saturday had never seen a Yellow-footed rock-wallaby in the wild. The Flinders Ranges is one of the wallaby's few remaining natural habitats, and due to their small numbers are a protected species. They are not as large as a kangaroo, but have an amazingly long tail that features dark rings, and orange/yellow fur on their ears and limbs. They are such a pretty animal.
We watched this little fellow graze on the edge of the cliff face for what seemed like an age: He/she wasn't bothered by the attention in the slightest.
Posted by xo.sorcha.ox at 11:11 AM 1 comment:

On My Mind: Winter's Teeth. 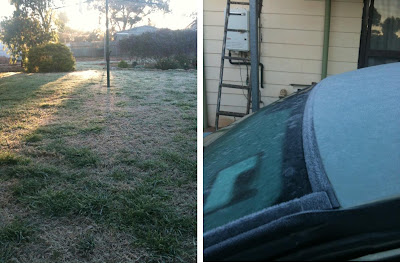 Boy, was it another frosty one this morning! (Even though this is phrased as a question, it's actually made as a statement. Don't ponder its grammatical incorrectness too much: Just trust me when I say it's an Australian thing.)
I know I seem to be talking about the weather a lot lately, but during mid-winter what else is there to talk about? It's too cold to do anything except sit around and discuss how cold it is.
When we woke at 6.30am it was still below zero (degrees Celsius) outside, and through the window (there was no way I was venturing outside!) I could see the frost glistening in the first light of the day.
We have had frost every morning this week. I'm starting to worry about the garden: I often turn the sprinklers on for a few minutes before leaving for work, just to spray the ice off the plants before the sunlight reaches them so they don't suffer frost burn, but this morning there was no hope of that as the water pipes were frozen solid!


**~**~**~**~**
This is a Friday photo feature from Down to Earth that anyone with a blog can join. It opens the door to us sharing our lives through these photos and gives us all a new way to discover each other, and maybe form new friendships. Your photo should show something at home that you're thinking about TODAY.
To take part, all you have to do is post a photo, write a short caption explaining it, and link it back to Down to Earth. Please write a new post, don't link to an older one. When your photo is published, go to Down to Earth and add a comment , with a link to your blog photo.
Posted by xo.sorcha.ox at 10:18 AM 4 comments:

In the Garden: Confused Quandongs?

[Unripe Quandongs, July 2011]
"Not only can its flesh be turned into nice jellies, jams and pies, it is also stuffed to the limits with Vitamin C and houses quite a number of valuable minerals. Furthermore, it may be dried and stored. The kernel contains valuable proteins and is rich in oil. The plant itself is not very fussy about different soil conditions and climates, nor about water quality. It is therefore, in economical terms, a potentially valuable plant which can be grown in the drier parts of the country, too. However, trying to "domesticate the quandong", as one scientist put it, is not all that easy." - Australian Plants Online

Being the middle of winter (and, as is expected of this time of year, being terribly cold), I hadn't expected to find fruit appearing on trees, yet that is exactly what I've found on our quandongs (Australian native/wild peach) late last month when I was wandering through the garden.
It was only in October of last year that I was making crumble pie with stewed quandongs picked fresh that week, so when I noticed the trees were in fruit again I thought it a little early. Quandongs in the Flinders Ranges ripe around September/October, so fruit wouldn't normally start to appear until August/September, depending on the weather.
So, it looks as though my trees are two months early to fruit. I can't help but think all the La Nina rain we had during the summer months is at fault, just as it was to blame for confusing the bulbs and leading them to flower unseasonally early - in autumn rather than spring.
I'm hoping that the frosty winter weather won't damage the fruit. For me, the end of spring and the advent of summer has always been announced with the ripening of quandongs.
I'll continue to eagerly watch their progress over the coming weeks (months?), and I'll be keeping my fingers crossed for fine produce!
Posted by xo.sorcha.ox at 2:12 PM 4 comments:

New in Blogland: Out Back Trains.


I wanted to share with you a new blog that my stepdad (Phil) has put together called Out Back Trains. As a locomotive driver in outback South Australia, he travels to locations that most people outside of his profession will never get to see and experience for themselves. It is predominantly a blog for sharing his photos and stories collected over the years whilst working as a driver on freight and passenger trains. It's well worth the look!
Posted by xo.sorcha.ox at 2:38 PM 1 comment: 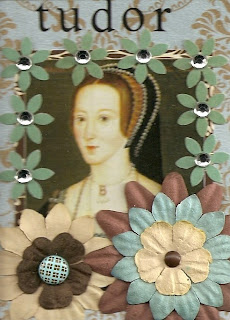 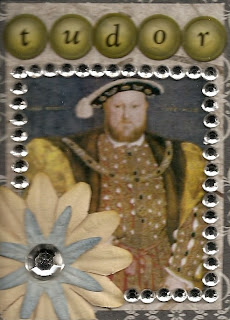 "The most handomest prince in Christendom"
Tudor ATCs made July 2011
(via Favourite Time in History ATC Swap at Swap-Bot)
~ I'm somewhat annoyed that these didn't scan all that well, considering these are my favourites to date, and the first ATCs I've made in over a year. It is all the bling that is at fault, and I don't know how to fix it, alas!
Posted by xo.sorcha.ox at 4:26 PM 2 comments:

Winter Wednesday: The fog is rising...

The drive into work this morning started with rain, then became pea-soup fog, and then dissipated back into rain as we came up and out of the Ranges.
Last night had such a chill to it that I found it difficult to sleep; the combustion heating had been lit all day and continued ticking over all through the night, but Winter's icy cold grip refused to abate.
Winter Wednesday is a photo feature hosted by Hazel Dene.
(I felt today's dark, gloomy winterness was the perfect opportunity to join in.)
Posted by xo.sorcha.ox at 8:49 AM 3 comments:

Dead Until Dark by Charlaine Harris

Dead Until Dark by Charlaine Harris
My rating: 4 of 5 stars
'You're different,' he said. 'What are you?' He seemed to be going through a list of possibilities in his head from the way he was looking at me. To my pleasure, I could not hear a one of them.
'Well. I'm Sookie Stackhouse, and I'm a waitress,' I told him.
Dead Until Dark is the first novel (of 11 to date) in the 'Sookie Stackhouse' series by Charlaine Harris. Orphaned as a child, Sookie and her brother, Jason, are raised by their Gran in the small town of Bon Temps, Louisiana, where as adults they continue to pass their lives. Sookie leads an otherwise uneventful life: She is a waitress in a local bar, but she does possess an interesting gift - The ability to read minds.
Sookie's world is one where vampires are accepted as being real and have assimilated into the community, with the mainstream opinion being that they are the victims of a rare virus. Sookie comes face to face with her first vampire when Bill Compton returns to his family home in Bon Temps - more than 100 years after his "death". This chance meeting with the vampire Bill sets in motion a series of heartstopping events - of the romantic, destructive and life-threatening kind.
My first impression of Dead Until Dark was that Harris' style was so simple it bordered on amateur, but by the time I'd reached the hundredth page I was totally, unequivocally, unrepentently hooked. The storyline and writing style may be uncomplicated, but the story is written from the point of view of Sookie, and what is so likeable about her is that she is a completely uncomplicated character.
I enjoyed this novel not because it's a literary masterpiece, but because it's the exact opposite and yet still suckered me in. Dead Until Dark is a light yet gratifying snack of a novel: The story flows effortlessly from one page to the next, and is not weighed down by heavy descriptive or emotional text. Harris easily draws the reader into Sookie's dark and mysterious existence, the confines of her mind being an intriguing (and sometimes amusing) place in which to spend 300-odd pages of book.
It may be "vampire trash", but it's terribly good vampire trash, and I'm looking forward to starting the next installment.
View all my reviews
Posted by xo.sorcha.ox at 2:27 PM 1 comment:

About the House: Renovations & Repairs.

Despite my silence I am still here, but the days and nights are crazy-busy at the moment.
Renovations on the house are still in full swing: SJ took two weeks annual leave to get as much as possible completed. We are almost done with the living room and the dining room, just waiting on some architrave to arrive and still have to replace a few pieces of skirting that are old and damaged beyond repair.
[Our living room last week]﻿
Not including the gyprock and cornice (I'm unsure as to how many metres of this we've needed so far), in the living and dining area alone we have so far used approximately 45kg of top coat, 12L sealant primer undercoat, 8 tubes of No More Gaps (I'll be opening the ninth this evening), 12L low sheen paint, 8L semi-gloss paint, and a countless number of screws, nails, glue, and sandpaper...
SJ is confident of having these two rooms completed over the weekend so that we can move our attention to the entrance hall, which still needs sanding, undercoating, No More Gaps-ing, painting...
There will be a series of "Before" and "After" pictures to come, hopefully in the not-too-distant future! I can't wait to show you what we've achieved (all of us amateur renovators!).
Posted by xo.sorcha.ox at 10:48 AM 1 comment: