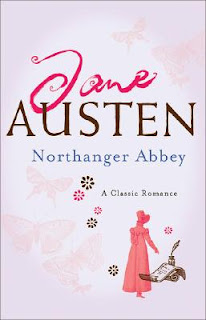 Northanger Abbey was Jane Austen's first published novel, and tells the story of 17yo Catherine Morland's first social experiences in Bath and then later at Northanger Abbey.

Catherine is a fan of gothic novels, and is a guest of Mr & Mrs Allen's whilst in Bath, where she meets and makes friends with Isabella Thorpe, and is thrust into the social scene with balls and dinners. She becomes the love-interest of John Thorpe, Isabella's older brother, but rejects his advances because not only does she find him annoying and almost unbearable to be with, she is in love with Henry Tilney, brother to another new friend Eleanor. Once her stay in Bath comes to an end, she is invited by the Tilney's to spend time with them at their family home, Northanger Abbey.

What makes this novel so much fun is that once at Northanger Abbey, Catherine lets her imagination run wild with gothic fantasies, which leads to her making a major social faux pas. However, through her error she grows and develops from the mind of a child to that of a young woman, and the affection felt for her by the Tilney's is not diminished by her mistakes.

Groomed by General Tilney as a suitor for Henry, Catherine later leaves Northanger Abbey in a rush of mystery and intrigue. Of course, as is Jane Austen's style, the truth behind her sudden departure from the Abbey is later revealed, and in true romantic fashion: "all's well that ends well".

Fun, quick and easy to read, Northanger Abbey is well-deserving of 4 out of 5 stars.