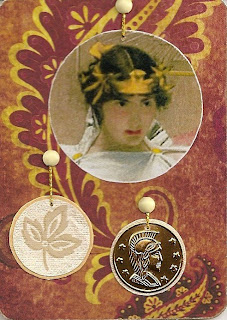 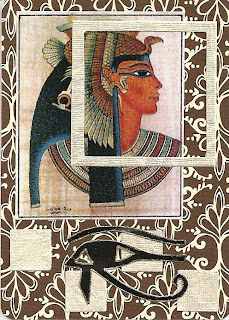 "Cleopatra VII Philopator"
Cleopatra ATC via Swap-Bot
In Brief:
Cleopatra VII was a Hellenistic (Macedonian) ruler of Egypt.
She came to power first as co-ruler with her father Ptolemy XII, and then later with her brother-husbands Ptolemy XIII and Ptolemy XIV.
Following their deaths she ruled in her own right, forging an alliance with the Roman Empire by bearing a son (Ptolemy Caeser) to the Roman Emporer Gaius Julius Caeser.
After Caeser's assassination, she aligned with Mark Antony, with whom she had three children (twin daughters and a son).
Cleopatra and Antony were defeated by Caeser's legal heir Octavian at Actium. Following the defeat, Antony took his own life, shortly followed by Cleopatra, who in legend used the bite of an asp, on 12 August 30 B.C.

"For she was a woman of surpassing beauty, and at that time, when she was in the prime of her youth, she was most striking; she also possessed a most charming voice and a knowledge of how to make herself agreeable to every one. Being brilliant to look upon and to listen to, with the power to subjugate every one, even a love-sated man already past his prime, she thought that it would be in keeping with her rôle to meet Caesar, and she reposed in her beauty all her claims to the throne".
- Cassius Dio (Roman Historian)