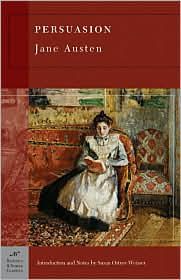 Recently I read Jane Austen's novel Persuasion.
Unlike other Austen novels in my possession, which have been read until the pages are worn (and in some cases come loose from the binding!), it was the first time that I had read this particular story.
I believe it to be one of Austen's later novels, and found it to be distinctly different to other stories that make up my favourites, such as Pride & Prejudice and Emma.
Persuasion, to me, felt quite sombre. The heroine of the story, Anne Elliott, is just so sad! I was waiting for the Austen sarcastic wit to break through, but it is hard to find anything funny when the heroine's sadness envelopes every bit of the story.
At times I felt that Austen had made attempts to be humourous and ironic, a trait that makes Jane Austen's stories so charming and enjoyable, but in Persuasion it all fell flat. I cannot say that I disliked the story, because the characters were interesting, as was the plot, but it wasnt what I was expecting, and I dont feel it will be added to my favourites list. I never thought I would say this about an Austen novel, but I dont believe I will make the time to read it again.
Have you read Persuasion? If so, what were your thoughts?