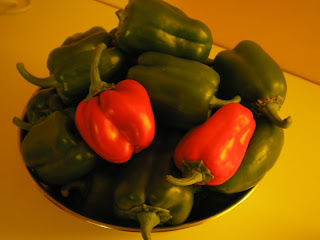 I planted three capsicum (bell pepper) plants last Spring, not expecting all three to survive or produce fruit. However, I have since discovered that capsicums do rather well in this part of the world, so not only did all three plants survive, they are all loaded with fruit and have been for at least the past two months.
It probably comes as no surprise then that we have capsicums galore! I am picking at least 10 every two to three days. It's simply too much! We've had capsicum with out meal almost every night, but I must admit that I cannot think of too many ways in which to cook capsicum apart from the odd salad, in pasta sauce, on pizza, roasted or stuffed. I suspect SJ is starting to tire of them, and I dont blame him. I've also chopped and frozen enough to last the next 6 months at least.
So, now I have a dilemma: What do I do with the rest?
I cant give them away to family as they all grow their own and are probably over-run with capsicums themselves at the moment. I brought a bowl full into work and tried to give them away to my work collegues but no one was interested, so at the end of the day I took the bowl full of capsicums home with me again.
That kind of irked me, actually. You can pay up to $6 per kilo for capsicums in the supermarket and no one wanted even one that was FREE. They are far more fresh and sweet than the capsicums you get from the supermarket too, so I'm a little perplexed. I know for a fact that none of them grow their own produce, so why so uninterested in some free food? Do they not want to be seen accepting free stuff?
So, I'm stuck with a whole bunch of capsicums and I dont know what to do with them. Does anyone out in blog-land have any fun, interesting and tasty VEGETARIAN recipes (or recipes that can be converted to vegetarian) for capsicums? Chutney or pickles, perhaps? Dip? Soup or sauce? A nice stuffed capsicum recipe even, one I havent tried already?
I'd be so grateful for any suggestions, and the recipes I successfully use I will share on this blog with a link back to the person who gave it to me.
Posted by xo.sorcha.ox at 11:47 AM