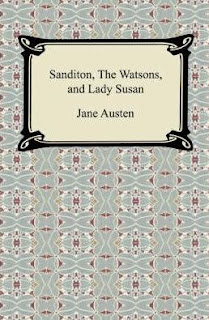 Title: Sanditon, The Watsons & Lady Susan
Author: Jane Austen
Category: Fiction
Jane Austen Reading Challenge 2010
Sanditon, The Watsons & Lady Susan is a collection of Jane Austen's unfinished works.
Sanditon is the least complete of the three, and as such is rather difficult to form an opinion on. It is based around the seaside town of Sanditon and the locals' attempts to make it a popular attraction for those sickly folks seeking the healing remedies of the ocean.
The Watsons tells the story of widowed Mr Watson and his young daughters as they seek love and fortune. Mr Watson's youngest daughter, Emma, is sent back into her father's care at the age of 19 after having been raised and educated by a wealthy Aunt, and this is where the story begins. After she attends a local ball she becomes the talk of the town and earns the admiration of many wealthy local men.
Lady Susan is the most complete of the three stories and is an episotolary novel (in the form of letters) about the flirtatious escapades of a wealthy young widow as she hunts down a new husband and creates for herself a questionable reputation in the process. Self-absorbed, petty, cruel and vain, Lady Susan is not one of Jane Austen's more likeable characters, but the story is most enjoyable.
Overall an easy read: 3 out of 5 stars.
Posted by xo.sorcha.ox at 11:32 AM