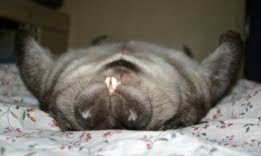 Ving the wombat takes a nap! Picture from here.
I love animals. It is one of the many reasons why I am vegetarian. I am especially fond of Australia's native animals, and every day I am blessed to see kangaroos, wallabies, and emus in the wild. When we lived in the city we were not far from a nature reserve where there were koalas in the wild, and sometimes in summer during heatwaves they would wander into the suburbs looking for water.
But this isnt a common occurence right across the country: Not everyone in Australia is as privileged as I have been.
Today I discovered that it is possible to sponsor a wombat - one just like Ving (pictured above)!
Wombats are intelligent marsupials native to Australia. They are hunted for food and sport, are killed by farmers who consider them a pest, and suffer diseases such as mange, passed onto them by foxes. A female wombat may only produce young once every two to three years, so it probably comes as no surprise that they are also endangered. However, they receive poor protection from government.
I think the wombat is often Australia's forgotten marsupial, perhaps because it is so rarely seen. We have wombats in South Australia. Where I grew up on the Eyre Peninsula the Southern Hairy Nose Wombat is native. I have seen wombats in captivity, and come across burrows, but I have never come across a wombat in the wild.
Pehaps this is not simply because they are nocturnal and shy - Perhaps it really is because there are so few of them left?
If you'd like to learn more about the plight of these adorable creatures, please visit the Wombat Awareness website, and to sponsor one simply go here.
Posted by xo.sorcha.ox at 10:20 AM