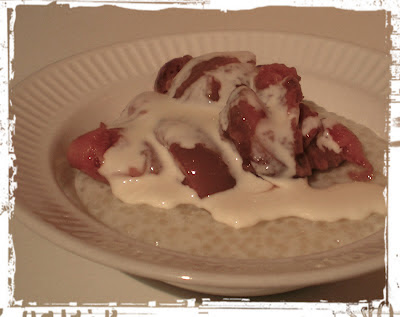 I am happy to report that I finally found some sago last Friday, in Woolworths, on the bottom shelf in the section where you'll find rice cream and maple syrup, between the canned fruit and the dessert items. The exact place where my logical-thinking brain told me I would find it. Nice one, brain.

Anchor's Lion Sago is the only brand they stock, however, which I feel is severely over-packaged: A tiny bag of sago seed inside a box that is at least two times too big! Most of what is inside is air! I would have much preferred to purchase my usual McKenzie's Seed Tapioca as I feel it is more appropriately packaged, but I had no choice. I was tempted to purchase every box in stock but I limited myself to just the two, which should last a few months at least (although at the rate that SJ is eating it, perhaps not).

If I am wanting to make something quick and easy for dessert, something that feels light but is actually rather filling, I boil some sago in milk and sweeten it with sugar and vanilla essence. I eat mine with stewed fruits and cream, or you could do what SJ does and sprinkle it with Milo. He insists it is tasty, a vanilla-jelly with chocolate-malt sprinkles. Personally, I'd rather just stick to the fruit.

To make the sago featured in the picture above, all you need is:

Soak the sago seed in the the milk (refrigerate. Obviously) for at least an hour; the longer you let it soak the less time it will take to cook.

In a medium saucepan, bring the milk and sago to boil, then reduce to a simmer. Stir constantly until sago is clear and mixture is sticky. Remove from heat and stir in sugar and vanilla essence. Pour into bowls (or moulds, if you want to be clever) and refrigerate until cool. Then serve.

So easy, right? This recipe usually provides two to three servings, depending on how much of it you'll eat in one sitting. If you need more, double the mixture and use a larger saucepan - the sago increases in size as it cooks so you'll need the extra space.

Now I really want to try cooking sago in coconut milk. I'm a huge fan of Asian-inspired desserts: They are so deliciously simple. One of my all-time favourites is sticky black rice pudding (which is cooked in coconut milk) - truly delectable. Since sago and black rice have a similar sticky end result, I can't see why I couldn't make a sticky coconut sago pudding, sweetened with maple syrup. How good does that sound? (The question is rhetorical)

I am drooling at the mere thought of it.


Edit 16/7/12: DO NOT cook sago in coconut milk! DISASTER! It goes like glue, looks like cement and tastes little better. It would appear that black rice and sago are nothing alike.
Posted by xo.sorcha.ox at 2:24 PM