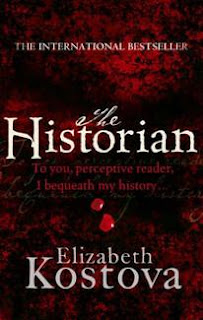 The reason for my absence: I've been reading The Historian by Elizabeth Kostova, a 700-page novel where the plot is centred around the idea of Vlad Tepes/the Impaler (the real Dracula) being an actual, real night-stalking-blood-sucking fiend. And since there are so many pages I've been reading a few here and there whenever the opportunity presented itself: on lunch breaks, during adverts whilst watching tv, during the football and cricket, in a crazy attempt to try and have it finished within a reasonable time.

Now, I'm picky when it comes to vampire stories. Very picky, and I was somewhat apprehensive about reading this one. However, it is more historical fiction than just another vampire story. Kostova has undertaken some serious research in order to portray the characters and places in the book, from Vlad/Dracula, to life in Communist Europe in the mid-twentieth century, to medieval monastries, Ottoman traditions and customs, vampire lore, historical events and beyond. Taken from this point-of-view the novel itself could be a work of genius.

Could be, but alas, is not.

Kostova lets herself down in the manner she chose to communicate the story to the reader. It begins normal enough, in first-person narrative, told from the perspective of a young woman who stumbles across her father's unfortunate legacy: the hunt for Dracula. However, as the novel progresses, one person's story turns into four, and how does Kostova attempt to tell the four different yet intertwining stories? Through letters, and journal entries, and postcards, and page after page of continuous dialogue. The young woman the reader is introduced to at the start of the story, and who pops up again for a few pages here and there through the middle, and then closes it at the end, fades into the background and her purpose in the construction of the story as a whole becomes unclear. In fact, the entire story could have been just as effective without her at all. I cant even recall her name, if she had one...

It doesnt feel like a 700-page novel; it is a relatively easy read, despite being awfully frustrating at times.

Belongs to my permanent collection, and is available to loan under my bookcrossing conditions found here.

Now that I have finished my Winter reading list, two weeks early, I've decided to start on my Spring Reading (September - November), which (if all goes to plan) will include the following books:

1. How the Irish Saved Civilization by Thomas Cahill
2. Daughter of the Forest by Juliet Marillier
3. Wuthering Heights by Emily Bronte
4. The Boleyn Inheritance by Philippa Gregory
I'm looking forward to enjoying these books outside in the warming sun, drinking coffee, listening to the birds in the trees, and watching the change of the seasons.
Posted by xo.sorcha.ox at 5:05 PM