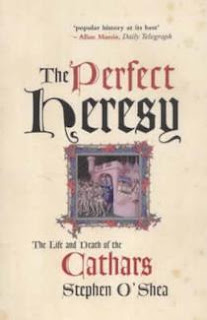 Title: The Perfect Heresy
Author: Stephen O'Shea
Category: History (non-fiction)
Format: Paperback, 352 pages
Published: UK, 2001
"How many armed knights you'd have seen there, how many good shields cleft, what ribs laid bare, legs smashed and arms cut off, chests torn apart, helmets cracked open, flesh hacked, heads cut in two, what blood spilled, what severed fists, how many men fighting and others struggling to carry away one they'd seen fall! Such wounds, such injuries they suffered, that they strewed the battlefield with white and red". - An eyewitness account to the Battle of Toulouse, 1217
The Perfect Heresy: The Revolutionary Life and Death of the Medieval Cathars is a splendid historical look at the 13th Century Crusade and Inquisition undertaken by the Catholic Church to rid the Languedoc of the Cathars.
The Cathars were a dualist Christian faith popular amongst the people of the Languedoc for their pious lifestyle of poverty, tolerance and spiritual guidance. They preached against the material world, and outwardly expressed their disapproval of the wealth accrued by the Catholic Church.
The Cathars were a truly amazing and resilient people, yet the indiscriminate force beared down on the people of the Languedoc by the Crusaders, combined with the cunning of the Inquisitors eventually saw the Cathar faith disappear and be relegated to the pages of history.
Stephen O'Shea's description of the events that took place during the this period of history are brilliant and read like a novel. Never does it feel like an academic textbook. O'Shea's determination to get the Cathar story right is evident from the first page to the last, and he goes to great lengths to debunk the myths about the Cathars that surfaced during the Victorian Era, were mis-used and abused by the Nazis, and embellished by the hippies in the latter half of the 20th Century.
The story of the Cathars is one of violence, persecution, determination, and above all else: faith. It also acts as a reminder of "the dangers of the absolute", and is definitely a book that everyone should have taking pride of place on their bookshelf. It is that brilliant!
Ever since I'd first heard of the Cathars nearly 15 years ago, I've been searching for a book of this calibre to read. It took 2 years for me to track down a copy, so when I finally found a supplier I couldnt help myself and I ordered more than one.
So, that means I have a brand new copy of this book that I am just ITCHING to giveaway!
Each legitimate comment received on my blog or at my livejournal between now and the 9 March 2010 will go into the draw.
If you want to double your chances at winning, comment and then promote this giveaway at your blog, and I'll put your name into the draw twice (you'll have to let me know you're promoting it, though).
After the 9 March 2010, I will randomly select the winner.
This giveaway is open to anyone from anywhere, domestic and international.
Good luck!
Posted by xo.sorcha.ox at 3:28 PM