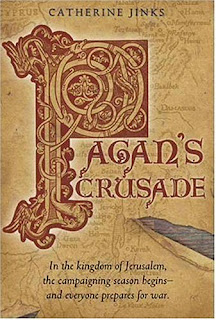 Title: Pagan's Crusade
Author: Catherine Jinks
Category: YA Historical Fiction
Royal Reviews' Historical Fiction Reading Challenge
Pagan's Crusade is the first of five books in the Pagan Chronicles series by Australian author, Catherine Jinks. These were my favourite books when I was a teenager, and I remember reading the first three over a single weekend whilst visiting my grandparents when I was about 15 years old.
It was this book and series that introduced me to the wonderful world of history and historical-fiction. It was the series that began an obsession with the Middle Ages, the Crusades and the Cathars, an obsession that has continued to this day.
Pagan's Crusade is set in Jerusalem during the 12th Century, and the main character, Pagan Kidrouk, is 16 years old and an orphan. After he flees the monastry in which he was raised, he resorts to a life of petty crime to survive, before joining the Order of the Templar Knights as a squire to Lord Roland. Jerusalem is a dangerous and hostile place to be, and soon enough Saladin and his army are making their way through the Holyland with the aim of re-capturing Jerusalem from the Christians. It is at this time that Pagan and the people around him are forced to decide where their loyalties lie.
This was an enjoyable re-read, and I wasnt disappointed by it at all. I was a little worried I would be, but I knew this was a book for "young adults" and each paragraph reminded me of the sheer joy I felt reading this for the first time as a teen. I couldnt stop myself from giggling at the teen-esque jokes, either. An adult reading this novel for the first time would have to read it with the frame-of-mind of a teenager, otherwise it may seem somewhat simplified and a little flat. Pretend you're 15 y.o if you plan on reading this one!
I highly recommend this book to both girls and boys aged between 14 and 17 years. It's just so much fun (and so much cooler than Harry Potter)!
The other books in the series are: Pagan in Exile, Pagan's Vows, Pagan's Scribe, and Pagan's Daughter. I'm hoping to read them all this year.