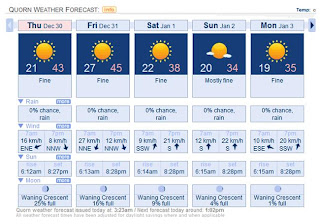 Forecast from willyweather.com.au
﻿Talk of the weather over the past few months has referred to mild temperatures, thunderstorms and plenty of rain.
In fact, it was so mild and so wet I was beginning to think that summer would just pass us by this year, and we'd not have to spend days and weeks (and months!) sitting in the dark with the air con on high.
Turns out that was a pipe dream, as summer made its arrival Christmas Day when the temperature  hovered around 40 degrees Celsius until a cool change started to move through later in the evening.
A week later and we are back in the 40s again, with the temperature expected to range between 35 and 45 degrees over the next week.
I cannot think of the words best to describe it, but at the very least this type of heat is stifling. Walking outside is like stepping into a furnace: The air is so hot and dry it burns the insides of your nose and makes your eyes water. The tar on the road is starting to glisten and become sticky. Inside the air con is on but I'm still sweating enough to be stuck to my office chair. And I'm certain I just got sunburnt walking to the post office, which can't be more than 200m from the office.
There was a stubble fire just outside of Quorn yesterday that the CFS was quickly able to control and douse, but it instilled some scary thoughts and momentary panic. It's the first so close to Quorn in a long time, and if the weather hadn't been so kind it could have been an entirely different scenario. There'll be no fireworks this New Years' Eve, that's for sure!
This is the type of weather I dread every year. Having lived in South Australia my entire life you'd be forgiven for thinking I'd be used to it by now. Perhaps I'm just getting "soft" as I get older, or perhaps this is just weather you never become accustomed to.
With heatwaves and floods, Australia's start to the New Year is not going to be what most had anticipated and planned for.
...What's the weather like in your part of the world at the moment?
Posted by xo.sorcha.ox at 3:53 PM