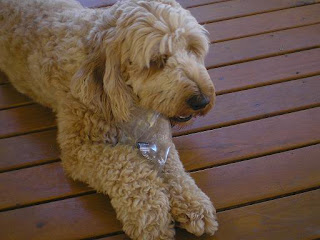 Our Bailey is the sweetest dog, but he has some interesting mannerisms.
He doesn't like to have wet feet.
He won't eat jelly or honey.
Everytime we have visitors he has to bring them something: A toy, a piece of clothing, his blanket, a pillow...
He gets most confused when we move or change things. He'll stare and cautiously sniff around until he's convinced himself that it presents no threat to him and his otherwise stress-free existence. 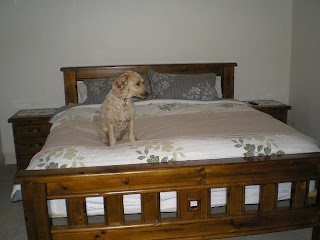 Not much else phases him, though. I'll happily wager that he is the most worry-free pet on the planet.
Not even being inadvertently locked in a bedroom for over an hour bothers him. There is no whining, no barking, no scratching... 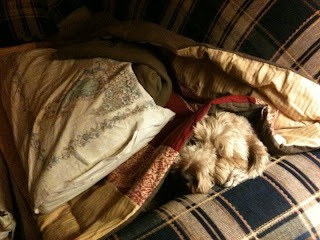 He simply remains calm and waits.
And waits.
And then waits some more, until eventually someone notices he's missing.
Then we're all in a tither searching for him, calling his name over and over again, opening doors to every room in the house, until... 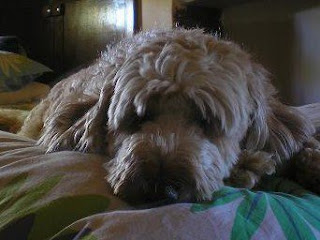 We find him.
In the spare bedroom.
Standing behind the door, tail wagging, with the biggest grin on his face that says, "I knew you'd come for me!"﻿
Posted by xo.sorcha.ox at 1:45 PM