In the Garden: When the Bubble Bursts... 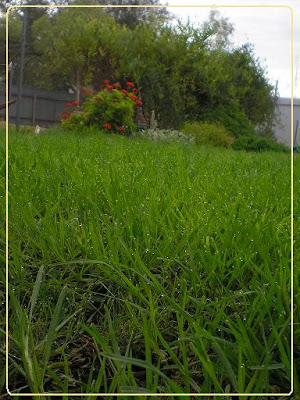 [Damp nights and dewey mornings]
Well, it rained.
Granted, our 45mm is somewhat meagre compared to the rainfall received by others in the district, but beggars can't be choosers, so I won't complain! 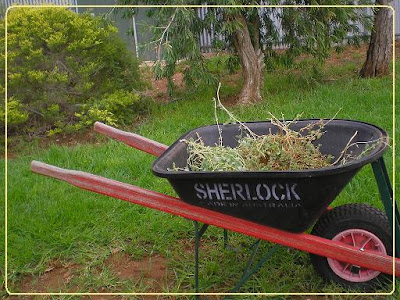 [A wheelbarrow of weeds]
I have been itching to get out into the garden and pull weeds for weeks, but the ground has been so dry that the damned things wouldn't budge.
Now that the soil is moist and soft they are pulling free nice and easily, making me a happy gardener indeed. 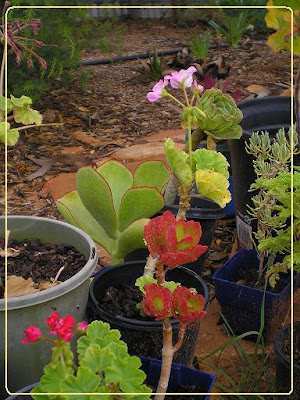 [Potted perennials]
I'm still unsure if I should plant the perennials I've grown from piece now, or if I should wait until spring?
Decisions, decisions! 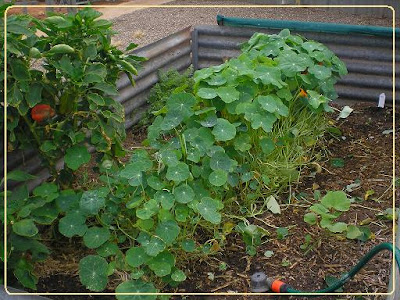 [One bed in the veggie patch]
We are still picking capsicums, carrots and spinach, but the seedlings I planted a few weeks ago are coming along nicely too: Pumpkin, cauliflower, eggplant, beets, leeks, and pak choy.
But I've had to cut back the nasturtiums in the veggie patch again. They work wonders with keeping the bugs at bay, but seemingly overnight can expand and multiply to the point where the other plants are lost beneath them (especially after a good, soaking rain)!
Posted by xo.sorcha.ox at 1:31 PM