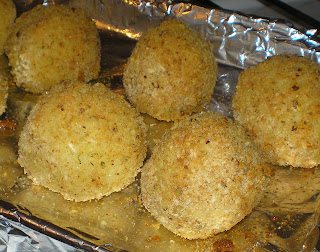 I've had this recipe ready to share for quite sometime now, and after numerous attempts at posting it and then discovering difficulties in explaining how to actually make them, I gave up.
Which is really odd, because these risotto balls are so easy to make!
So, here I am, on my fifth and final attempt at explaining how to make some delicious crumbed, stuffed risotto balls!
I first came across these a few years back when one of my sisters made some stuffed with zucchini and cheese to have at Christmas dinner, whilst the rest of the family indulged in copious amounts of poultry, pig and seafood. I failed to get the recipe from her, but they were so tasty I had to try making them myself, and this particular recipe is the one I came up with.
I should mention that you dont have to stuff these with anything if you much prefer just to have them plain. However, I like them with a bit of veg and/or cheese inside.
Anyhow, the basic things you will need are as follows:
1.5 Cups Risotto (Arborio) Rice
1L Vegetable Stock
1 Cup Bread Crumbs (I have used Gluten-free bread crumbs before and it makes no difference)
1 Egg, beaten
Cook your rice in the vegetable stock, using the absorption method. Once approximately 90% of the liquid has absorbed, turn heat off and allow rice to cool.
Whilst the rice is cooling, I usually fry some finely chopped veg (I find zucchini, carrot or pumpkin tastiest) with a bit of onion and garlic in a small pan, and grate some vegetarian parmesan cheese. This I put in the centre of the balls as I make them.
So, when the rice has cooled, press into balls. These can be as big as you like. If you have difficulty "stuffing" the balls with your vegetables and/or cheese, then I find mixing it into the rice first just as effective, although keep in mind this can make the balls not stick together as well and appear as tidy as they would otherwise.
Once you've made the balls, put into fridge for at least half an hour to let them set. Then dip them into the beaten egg, coating evenly, and then coat with bread crumbs.*
Place balls on a lightly greased oven tray, and cook in a fan-forced oven at around 180 degrees Celsius until golden brown.
The risotto balls are super tasty even when reheated, and keep in the fridge for up to four days without going soggy.
*If you dont eat egg, instead of putting the balls in the fridge to set, roll them in the bread crumbs whilst they are still sticky, and then pop them in the oven to cook.
Posted by xo.sorcha.ox at 2:50 PM