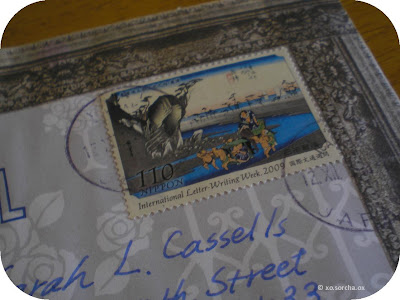 Welcome to the first Monday Mail Out for 2012!

I received a letter last week from my lovely Japanese penpal, Megumi. The postage stamp she used caught my attention: International Letter-Writing Week.

It was news to me! How is that an avid letter-writer such as myself had never heard of International Letter-Writing Week? So, I've been investigating.

As it turns out, it is a real thing:

"International Letter Writing Week was established at the 14th Universal Postal Union (UPU) Congress held in Ottawa in 1957 with the aim of contributing to world peace by encouraging cultural exchanges among the people of the world through letter writing". - UNOstamps

Australia, however, does not.

From the information I've been able to source online, we do not have a special day, week or month to commemorate letter-writing at all. Am I the only person who thinks that would be something the post would want to do, encourage people to send letters? 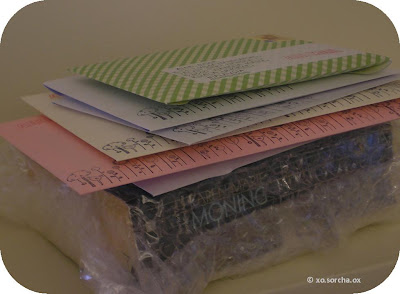 It's a good thing I don't need an excuse to write mail! I had a lovely letterful weekend, writing to old and new friends, choosing their stationery, decorating and/or making the envelopes.

Whilst I was buying stamps at the post office today I discovered that Australia Post has released their annual Chinese New Year stamp issue: 2012 is the Year of the Dragon! This stamp issue is always particularly pretty and I look forward to it every year.

Still disappointed we don't have a Letter-Writing Week, though...
Perhaps I should start my own?

Written correspondence has been a hobby of mine for a long time, & Monday Mail Out is a weekly feature whereby I can share my love for the lost art of letter writing. I hope my experiences will encourage others to send out letters on Monday too, and have them rediscover the joy of sending and receiving mail. If you have a blog, feel free to join in.
Posted by xo.sorcha.ox at 2:33 PM