In the Garden in the New Year... 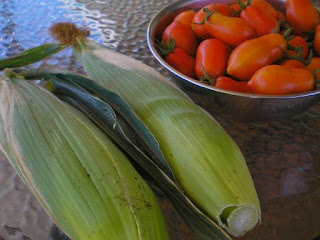 Well, it's 2012 already. I hope that everyone had a wonderful end to 2011, no matter how it was spent. For me, New Years' Eve isn't a big deal, so I spent mine watching a bit of television with the air con on. I didn't crawl into bed until 1am, but that wasn't due to ringing in the new year: I actually had to wait until the bedroom was cool enough to be able to sleep. It was a right scorcher here yesterday (low 40s - degrees Celsius) and today is turning out to be another. It has only just gone midday yet outside it feels as though it is in the 40s already: I tanned picking the tomatoes this morning. Seriously. 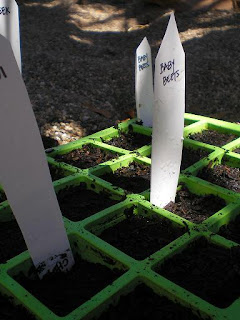 The warm weather is germinating seeds at an exceptional rate. I sowed leeks, beets, pak choy, cauliflower, eggplant and basil just a few days ago, and now seedlings are already poking through the soil. I'm hoping these will be ready for planting later this month, or early February, if all goes to plan. 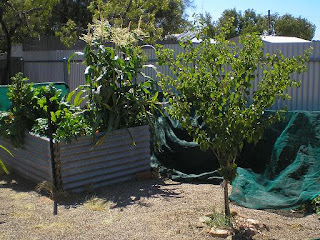 We picked the first cobs of corn this morning, along with some more roma tomatoes. On the really hot days the tomatoes are cooking on the vine, so we've taken to covering them with shade cloth during the warmest part of the day. It's helping. A little. We're having to pick the ripening tomatoes earlier than normal so they don't end up ruined. They're a lot smaller this year than what they have been in the past, and whilst we have plenty of romas, the big reds don't seem to be fruiting much at all.
I had hoped to have enough tomatoes this summer to make sauce, but it doesn't look as though that will happen. C'est la vie!
Our little vegie patch has capsicums ready to pick now too, and later this month I expect the carrots to be ready.
I need to thin the nasturtiums, though. Even with the heat they still grow like weeds, taking up more space in the vegie beds than I think is necessary. They are good at keeping away the bugs, though. I was just saying to SJ last night that we've had no thrip or aphids or grasshoppers attack our vegies this year. Only cabbage moth, but we've been able to control them. Makes gardening a lot easier, that's for sure!
What's growing in your garden these days?
Posted by xo.sorcha.ox at 12:54 PM