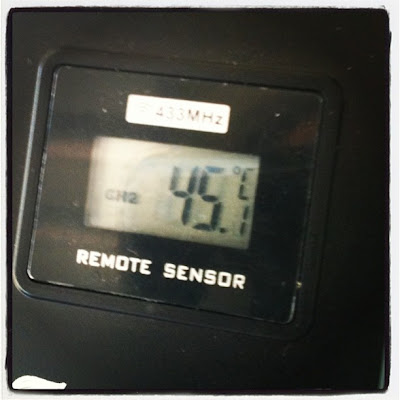 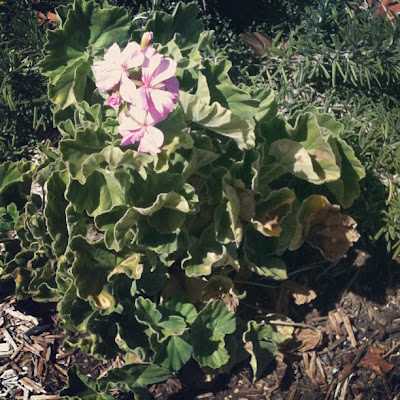 [Day 3: Geranium with its leaves starting to curl in on themselves. It has since dropped its blooms and is starting to shed its leaves to conserve energy. I wish I had leaves to shed!]
I've lived my entire life in South Australia, the driest state on the driest continent on earth. I've experienced a few hot summers in my (almost) 32 years and some absolutely scorching days. I remember in 2011 the temperature reaching 47*C the day before Australia Day (25 Jan) and I had to walk the mail to the post office for work. Stepping outside from an air conditioned office was like climbing into an oven: The air was so hot it burnt the insides of my nose and when I breathed in it would catch in my throat and set my eyes to water. The glare off the pavement was blinding and I got sunburnt on the 150m or so journey to the post office and back.
I can also recall the entire family spending a summer camped out in the kitchen, mattresses and sheets moved from the bedrooms and sprawled across the floor when I was about 12 years old. It would have been one of our first Spencer Gulf Summers. I remember the house in permanent darkness, all the blinds and curtains pulled closed in an attempt to keep the heat outside from seeping through the windows.
However, the most ridiculous of summer days that I have had the unfortunate luck to experience would have been when I was no more than 9 years old: We were on my grandparents farm that day and the temperature peaked at a whopping 52*C - in the shade. I remember a congregation of wild birds under the back verandah, their little mouths set apart as they searched out water and tried to stay cool. There are certain things the brain never forgets, like the brightness of the sun or the heat on your skin. I've no idea how we managed to stay cool that day.
Today is day six of a relentless, seemingly neverending heatwave. Yesterday saw temperatures soar right across the southern parts of the country and whilst many of those regions have since been blessed with a cool change, it is not strong enough to penetrate inland and so here in the Ranges the temperature is already hovering around the 40*C mark. We've not seen a day below 39 degrees in the last six.
The BoM is predicting that the awful heat will continue and is looking to break some long-standing records. So for yet another week (at least!) we will continue to be shut indoors with the blinds drawn and the air conditioning permanently running. There's an abundance of ice tea and fresh water in the fridge along with all the heatwave necessities for sustenance: Custard, jelly, stewed fruit, fresh salads and hard boiled eggs.
How's the weather at your place?
Posted by xo.sorcha.ox at 1:44 PM