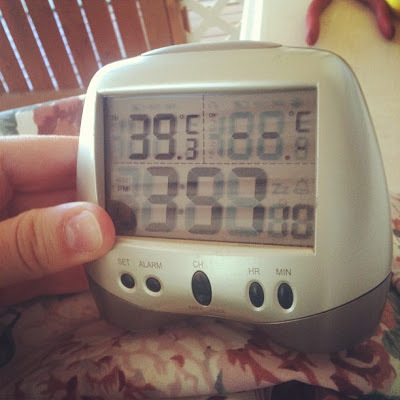 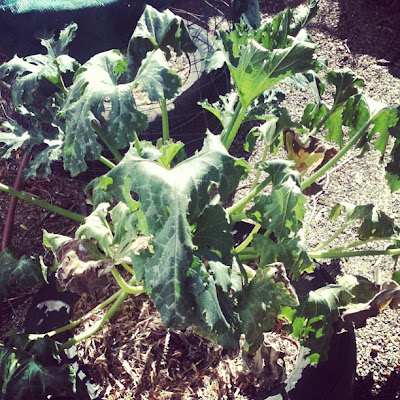 [Day 1: Zucchini plant wilting from the heat, even though it is permanently shaded by 3 quandong trees]
Last night when the clock struck midnight I realised that I cannot remember the last time I saw fireworks on New Years' Eve. Certainly not since we made the Ranges our home: New Years' always seems to fall on a complete fire-ban day and you cannot have fireworks during fire-ban. You could start a bushfire or end up in prison. Or both.
It gets hot here. I may have mentioned it a few times before. Summer in this part of Australia is generally a succession of heatwaves, one after another, and we're just entering our first biggie for the season. A heatwave in South Australia is when the daytime temperature exceeds 37*C for 5 or more consecutive days.
There is no official weather gauge where we live. The nearest BoM weather station is some 40km from here, situated right beside the ocean. We are inland, separated from the sea by an enormous mountain range. Because there are no official weather readings being made here the BoM applies the readings taken at the nearest weather station, but what it is there is often quite different to what it is here. As such, we take our own weather readings.
Despite weather forecasting being an imprecise science, the BoM likes to try and forecast up to 10 days in advance. At present the BoM is predicting that for 8 of the next 10 days the temperature is expected to be greater than 40*C, with 4 of those 8 above 45*C. As the BoM goes no further into the future than 10 days the current heatwave has no known end date.
Prolonged periods of extreme heat are exceptionally exhausting, even with air conditioning. It's too hot to venture outside for too long and we've no swimming pool or ocean to take respite. To ensure the house stays cool inside every window and door is securely closed, along with every blind and curtain drawn to keep the light out. The air conditioning is switched on when the inside temperature reaches 28*C and is left on until the outside temperature falls below 21*C, by which time it is usually dark. It's how I imagine living in a refrigerator would be like.
On the weekend Shane and I prepared the vegie patch for the heat - well, as much as we could, anyway. The plot currently looks like a little community of tents made from strategically-placed pieces of shadecloth and old sheets. Only time will tell how effective they will be, although yesterday afternoon I did spy a mouse keeping cool beneath the stalks of corn, and it was so hot that I didn't have the heart to shoo him away.
First thing every morning I water the vegetable and flower gardens with a bucket, which takes me about an hour (we have a fairly large block). We have been collecting the water from our morning showers in the bathtub and then transferring it to the garden, one bucket at a time.* As it's not rained in so long our rainwater supplies are minimal and the mains supply of water (from a bore) is becoming increasingly saline as summer presses on, which the plants simply do not like. In the evenings I water the vegie patch again, which is connected to a dripper system. The lawn is watered once a week for 20 minutes - not enough to keep it lush and green, but it is enough to keep it alive until the next decent downpour arrives.
Whilst watering this morning the temperature had already reached 35*C. I noticed a lot of plants were starting to hang low and the dry earth beneath my feet was giving off a distinct, smoldering odour, and it was only the beginning of Day 2. Even the geraniums, otherwise tough and hardy, had their leaves curled in on themselves and had begun the process of discarding their blooms to conserve energy. I suspect they know what's coming better than any weatherman would. Geraniums do survival well, I've noticed. When water is scarce they'll drop every flower, leaf and limb until there's nothing more than a grey-green stick poking up out of the earth, and you might think it's dead but it's not: A sort of summer hibernation, is all.
By the end of every summer I know that feeling well.
*This is a fantastic solution to keeping your garden well-watered during a prolonged dry spell and I recommend it if you have the ability (and the time!) to do it. It's amazing how much water would otherwise escape down the drain, mostly wasted, from a single 10-minute shower. However, check that your shampoos and soaps etc are suitable for grey-water use first as you don't want to damage your plants or the soil in your garden from an over-abundance of nasty chemicals.