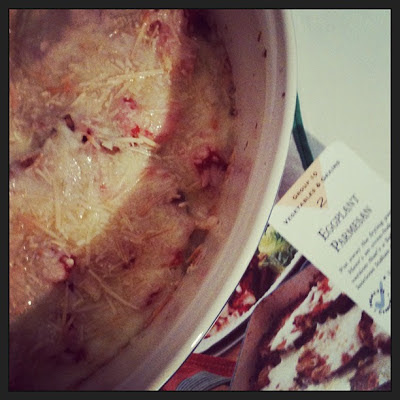 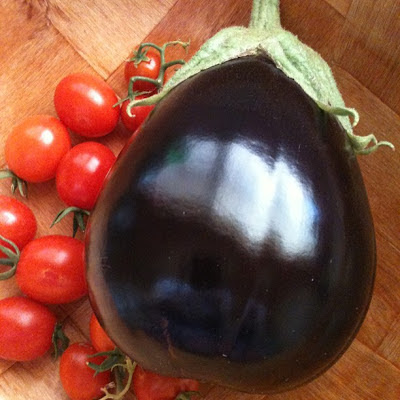 I made Eggplant (aubergine) Parmesan for dinner last night. Shane was adamant he wasn't going to like it but then when back for seconds. I was eating the toasted eggplant fresh out of the oven, before it even had a chance to reach the casserole dish. It really is delicious, so I thought I'd share the recipe so everyone can enjoy it.
It's based on a Quick, Light & Delicious recipe, which I've modified to suit my own tastes.
Ingredients:
3 eggs whites, lightly whisked
1/4 cup water
1 large eggplant (or 2 small) cut into 5mm slices
1/3 cup of plain flour
1 1/2 cups dried breadcrumbs
440g can diced tomatoes
2 cups grated mozzarella cheese
1/4 cup grated parmesan cheese (extra sharp)
Dried garlic flakes
Salt and pepper
1. Preheat oven to 200*C and line two baking trays with baking paper.
2. In a small bowl lightly whisk egg whites and stir in water.
3. Add grind of salt and pepper to flour, and garlic flakes (as little or as much as you like) to breadcrumbs. Dip eggplant in flour, then egg whites followed by breadcrumbs.
4. Place eggplant in a single layer on baking trays and bake in oven, turning once, until golden and tender (approximately 30 minutes).
5. Spread 1/3 of the tomatoes over the base of a medium casserole dish. Cover with a layer of the eggplant, 1/3 of the mozzarella cheese. Repeat layering with remaining ingredients, finishing with tomatoes, mozarella and parmesan on top.
6. Bake in oven until cheese melts and ingredients are heated through (approximately 15 minutes).
Enjoy!